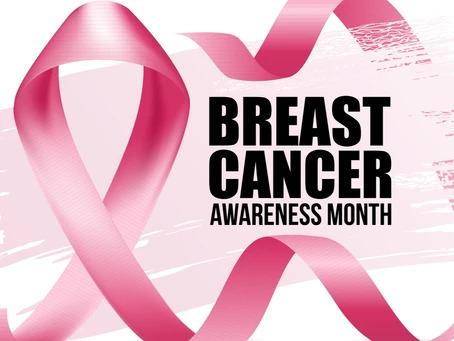 As the nights grow crisper and the colors start to brighten up the trees, there is a sense of fall coming down all over. We all know that Halloween, Thanksgiving, and the coming holidAY season are in the air. But there is another message that comes around this time of year as well. October is national breast cancer awareness month.

Breast cancer is one of those tragic conditions that people do not pay attention to until it is too late. The statistics about this commonplace, but still elusive, disease are both brutal and informative. 1 in 8 women in the United States will develop an “invasive” case of breast cancer in their lifetime. Additionally, an estimated 330,840 US women will develop some form of breast cancer this year, 2021.

As part of awareness month, there is a push to get information out there in order to help women know what’s going on with their bodies. Early detection is the best way to deal with cancer of any kind, especially breast cancer, which is a cancer with a good recovery rate if diagnosed and treated as soon as possible. Let’s look at some of the best ways to detect breast cancer and keep the awareness going, this month and all year round as well!

Self Exam
This is one of the main goals of awareness month: getting women to know and check out their own bodies! The self-exam on the breast should be performed on a regular basis. This means every time you shower could be a good rule of thumb for finding a time to perform it.

The self-exam can be performed in front of a mirror, in the shower, or laying flat on your back. Check for any differences in the texture or appearance of your breasts, such as lumps, of course, but also any swelling, redness, or dimpling on the breasts. Apparently, 40% of breast cancer cases are discovered through self-checking. So this means you are your own best first line of defense.

If you do perceive a difference of any kind, make sure to alert your physician. The next step will be to get a mammogram, a cancer marker test, or another form of advanced testing.

Breast Pain
Tenderness or pain of the breasts is something to look out for. But, fortunately, this is not often an actual sign of breast cancer. Lumps and differences in appearance are the most common form of symptom to signal possible cancer. Breast pain, however, is more often a sign of normal development or aging in women. These are the kind of sensations that can occur at any age and are often a marker of normal occurrences that happen to every woman. Puberty, pregnancy, nursing, menstruation, and menopause are all very normal conditions that can bring about pain in the breast.

Stages of Breast Cancer
A lot of women wonder what the cancer development process is for those who are actually suffering from the disease. Stage 0-1 is about whether the growth is contained in the place of origin or if it is spreading. For stage 2 and 2a, the question becomes whether or not the growth has extended from the breast itself, or out further than the neighboring lymph nodes. By stage 3a-3c, the cancer is spreading beyond the immediate lymph nodes and organs, but not much further than that. For stage 4, the issue becomes about cancer spreading to nearby organs and tissues. That is the most serious stage, and the most difficult to treat.

Send Us An Email Today!